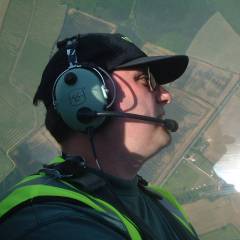 My name is Anthony Goffart and I was born in Andover, Hampshire in December 1968.

My mother Pamela lives in Cornwall near my sister, Tania, who was born in June 1974.

Sadly my father Derek passed away in 2007.

When I was three my parents moved to Cornwall and I lived there until 1978 when my father got an exchange teaching post in British Columbia for a year.
After this I lived in Cornwall again until 1987 when I went to Reading University to get my degree in Cybernetics and Control Engineering.

After my degree I moved back to Cornwall. The recession had hit and jobs were hard to find.
I worked for/with a friend from the village on the development of a 6-axis CNC machine and on other projects including an active feedback canceling microphone system.

In September 1993 after much disconbobulation I got a job with Solid State Logic as a Design Engineer in their R&D department.

For nine years from January 1997 to December 2005 I worked for the same company. The company, Oxtel, was acquired by Miranda in 2001. The UK office is based in Wallingford, in Oxfordshire. My work was a mixture of hardware (FPGA and PCB level) and software (C and Assembler). Recent projects include a many-input broadcast audio mixer board, a PCI to LVDS interface board for an HDTV project, a re-spin of the main video processing board in Miranda's Imagestore II channel brander and lots of software! I have also been involved with a real-time DVE effects board for re-sizing of broadcast quality D1 moving video pictures and a PC-style BIOS for booting a Linux kernel on a custom motherboard.

In January 2006 I moved to Phabrix Ltd.. At the time there were just two of us, me and my ex-Oxtel boss Phil Adams. The company has since grown to 20 staff in just over 5 years. We design and manufacture broadcast test equipment and the award winning company is now know globally.